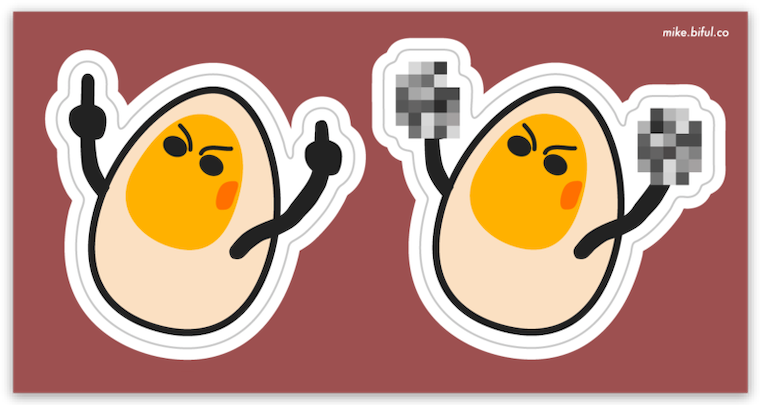 I wish I could do as much as I can to spare you the pain of hearing about the horrible shooting that happened in New Zealand last week.

But, as it works out, I'm really (really) mad about it.  So I made these angry little eggy guys, in honor of a particularly woke-ass seventeen year old who has made the news for publicly rebuking an Australian Senator who had some pretty disgusting views on the matter.

So, I've had a small run of these stickers made.  I'm going to sell them from my site, with 100% of proceeds going to the LaunchGood charity for the United for Christchurch Mosque Shootings.

So, want some stickers?

I'm not sure the best way to make this happen, but I'm thinking $5 for the pair of them.  They'll come die-cut, on a small sticker sheet which is about 2"x4" in size (so the stickers will be just smaller than half that size)  Want a set? Jump over to the shop page, and we'll make it happen. Thanks in advance for putting some good energy into the world.

Thanks for all of your support - I had a small run of stickers made up, and they were all gone within 48 hours! Next time I do something like this, I'll double the order.  Thank you all for your help.  It means the world ❤️