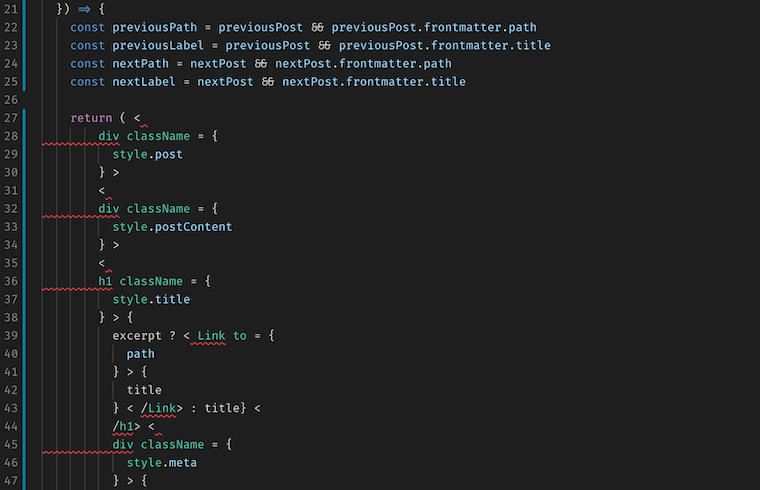 Prettier is "an opinionated code formatter", built to fit into your developer workflow. It's been out in the world for quite a while now, but until today, I had never successfully used it in any project I worked on. In truth, there's a few reasons for this:

1. I was really used to (and really happy with) using eslint-config-airbnb for all of my projects. Across the board, I'd configured every node/react/js-based project to use the same airbnb config, and had a functional workflow for ensuring code quality at some level through those lint checks.
2. I was too busy to switch. This is a bit of a bullshit answer, since one of prettier's biggest advertised features is its lightweight setup. That's not to mention the amount of time that prettier should save me once in use. A bad excuse.
3. I could never get it to work(!) So - despite being adept at reading through docs, every single time I started down the path of setting up prettier on a project, I couldn't get it to work. Despite my peers shouting from the rooftops about how deliciously sublime prettier makes the development workflow, it seemed like a permanent impasse.

So what was the problem, then?

Well, it all came down to a formatting issue. The header image for this article tells the story: every time I installed prettier, when I triggered formatting with Visual Studio Code's formatOnSave setting, my React/jsx components would get scrambled. After some squinting, it appears that something was telling my IDE to treat these jsx files as pure Javascript, where < means "less than", and shouldn't ever be treated as the start of a component <tag>.

In my case, it came down to a conflicting extension for Visual Studio Code. It turns out that the beautify plugin takes precedence over Prettier in its default configuration. After some plucking around, I determined that if I disable Beautify in the workspace where I'm using prettier, everything just suddenly... works. 😍

In my case, that was it! Prettier is now working as advertised.

The jury's still out on whether prettier is life-changing for me, but it's working, at the very least. My next step was to jump into .prettierrc, and override just a few settings:

(note: this is my first time writing JavaScript without semicolons. I'm really breaking the rules now!)