Why I switched to Fathom for analytics 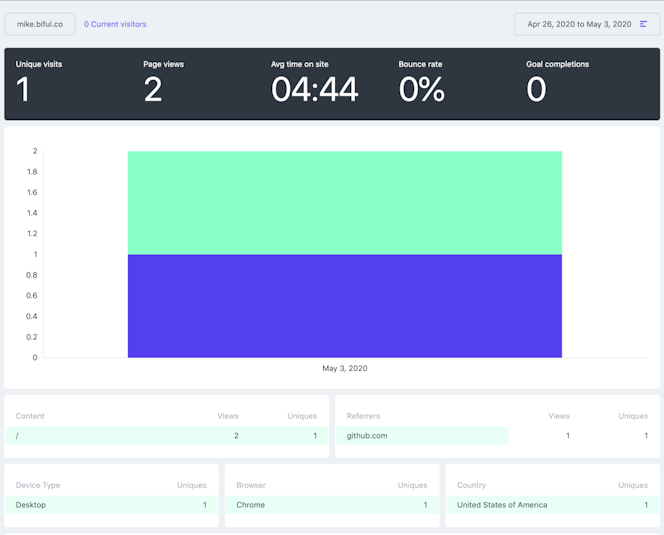 This morning, I fully switched my personal site from Google Analytics to Fathom - something that I had been considering for a while, and finally decided to go all in on.  Thanks to my colleagues @andrewpmiller and @jeremias for planting this seed months ago - I'm glad I finally made the switch.

In their words, Fathom is "simple analytics for website owners & businesses".  Near as I can tell, that's a perfect distillation of what they've built.  Fathom provides an easily digestible single page analytics view of your site's traffic.

It's a service that rids you of some of the heft of having Google watch you and your users' every move.  They're open and transparent about being Privacy First - something which has long since melted away from Google's ethos.

In addition to giving you information about the traffic coming and going from your web property, fathom also lets you set goals for your site traffic - so that you can keep an eye on performance of what matters to you.  Maybe you want to see how many people are visiting your "about me" page, or track newsletter subscriptions -- with Fathom, it's a straightforward javascript call to make that happen.

For me, the functionality it provides is perfect - my personal site is slowly growing in traffic, which is great! I had been using Google Analytics to keep an eye on my site's traffic, but honestly - I spent a disproportionate amount of time getting lost in all of the bells and whistles of GA.  That time wasn't giving me more usable insight... I was just getting lost in the tool.

I also love the idea of Privacy First tooling, which Fathom hits out of the park.  When you visit my site, I'm not keeping any of your PII, or doing anything creepy with your browsing behavior.  I just want to know how various articles perform, so that I can make better decisions about what to write in the future.

Another benefit was the install process - getting Fathom set up was a breeze. You may know that my site is built on Gatsby - it turns out there's a reasonably well-featured plugin for gatsby created by a member of the community. In addition to that, they're reportedly shipping their own plugin in the next few weeks.

Looking for a free option?

Fathom also has a self-hosted product called "fathom lite" which you can run yourself if you want to use their service for free.  It isn't as full-featured as full blown fathom, but it will give you a good idea of what you're in for.  I set it up on Heroku (using these instructions) for a few weeks before deciding to take the plunge and pay for Fathom's SaaS service.

Thinking about giving it a whirl? One of the perks of being a Fathom customer is their affiliate program - you can use my link to sign up for Fathom for a $10 discount on your first invoice.  Sweet!